Silicon Valley startups like Hustle, an ad-messaging company that spent lavishly on things like on-tap kombucha and arcade games for employees, are learning the hard way that party is coming to an end and the bill is finally due. Earlier this month, the company announced mass layoffs according to the WSJ . This depressing scene is now playing out across countless Silicon Valley startups, which sprung up like mushrooms when the money was easy and which are now starting to fold as the decade-long credit cycle tests the limits of the current bubble.

Startup investors and company founders warn that the unchecked growth of the past several years—which by some metrics exceeded heights from the dot-com boom—is hitting a limit. A rout of publicly traded technology companies is fostering newfound restraint for investors in Silicon Valley, especially for younger, cash-strapped startups like Hustle.

Startup investor Sunny Dhillon told the WSJ: “The unbridled optimism that inhabits our world is getting a shot of realism.”

To be sure, the warning signs were easy to spot, starting with the shrinking number of seed deals, which fell to just 882 in Q4 versus more than 1500 that took place three years ago. 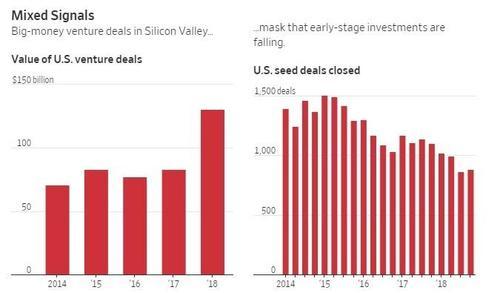 Because VCs have a tendency to follow technology stocks, the NASDAQ’s recent 12% pullback from its Sept 2018 highs put pressure on many startups: scooter companies Bird Rides and Lime both had to lower their valuation targets in order to raise capital during their last funding round. Other startups are failing outright, like Munchery, a meal kit service that had raised more than $100 million from VCs.

Even far more developed companies such as Elon Musk’s SpaceX have suffered from the rising pressure on startups to deliver. After failing to meet recent fundraising targets, the company had to lay off 600 employees and stated publicly that it had “extraordinarily difficult challenges ahead.”

Perhaps the most prominent recent example of a major investor – one that has been spending liberally over the past 10 years – suddenly getting cold feet, is Softbank which had to slash 88% of its planned $16 billion investment in WeWork after the bank’s backers objected to the deal.

Josh Wolfe of Lux Capital summarized the attitude in the VC world of changing from “’fear of missing out’ [to] ’shame of being suckered’.”

The sudden change in sentiment comes after a bumper year: U.S. VC backed companies raised a record $131 billion last year – eclipsed only by the previous record of $105 billion in the year 2000. And not all companies appear to be stuck – Uber and Airbnb are both still eyeing IPOs to help early investors cash out. 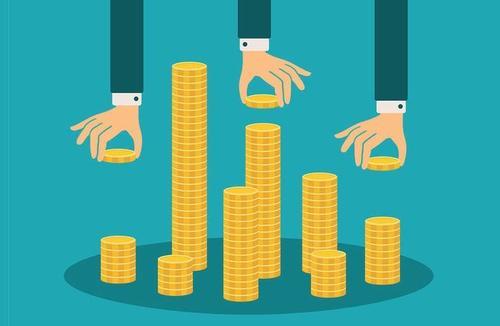 Blockchain VC investor Christian Ferris said that he has served on the board of three companies that have shut down this year. He said: “Last year, they were flying you in business class. This year, they can barely afford coach.”

Hustle, which placed two video games costing $12,995 in its headquarters, still has a pulse, albeit with a much smaller spending footprint. Hustle even went as far as to rip its espresso machine out of the kitchen at the company’s headquarters.

Hustle was hiring new employees recently, despite having fallen short of revenue goals for the quarter and year, people familiar with the matter said. Investors were uninterested in putting in new money after Hustle failed to reach targets in areas such as signing up new corporate clients, meaning it’s only a matter of time before the plug is pulled.

Its CEO and founder, Roddy Lindsay, said in a company disclosure about its recent layoffs: “I made the rookie misstep of not watching our growth closely enough, and we ended up overbuilding our team beyond our means.”

Another way of saying that” money was very easy… and then it no longer was.

Looks like it’s back to Folgers for the remaining employees, who will have a job for at least a few more months.

That’s why we only like late stage mature companies because they have proven themselves.  Startups are a gamble and you don’t know what’s going to come out of them.  Companies in our Matrix have been growing strongly for years.  New companies can be exciting but there are many risks in startups and really should only be for the most savvy VC investors.

For example, we just added Stripe to our hot list – and this is a company that we have been doing business with for a long time, due to their advanced API.  Stripe is a payment system for the future – that relies heavily on development and integration, rather than your typical merchant solution offered by banks.