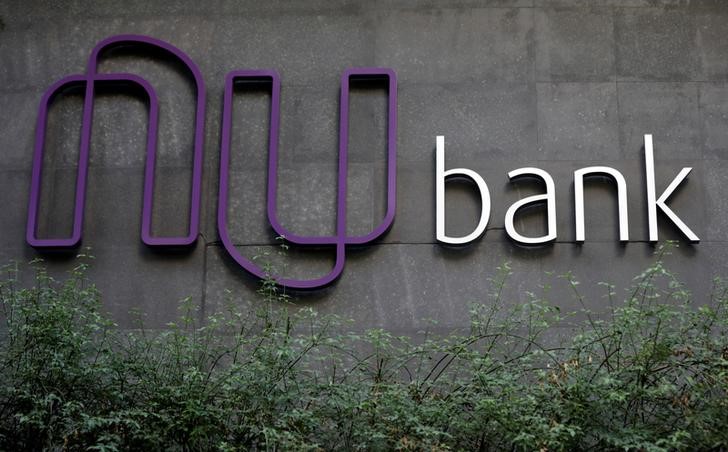 The logo of Nubank, a Brazilian FinTech startup, is pictured at the bank’s headquarters in Sao Paulo, Brazil June 19, 2018. REUTERS/Paulo Whitaker

BANGALORE/SAO PAULO, Aug 25 (Reuters) – Brazil’s Nubank is seeking a valuation in its planned U.S. initial public offering that would push the eight-year-old fintech past the $55.4 billion value of the country’s top traditional lender, two sources familiar with the matter said.

If Nubank is listed at a market cap greater than Itau Unibanco Holding SA’s (ITUB4.SA) $55.4 billion, it would vault into the ranks of the world’s largest fintechs, ahead of recently listed Robinhood Markets Inc(HOOD.O), for example.

One source said that in recent weeks Nubank’s bankers have pitched a valuation of as much as $100 billion. But the source said the Brazilian fintech unicorn was unlikely to be valued so highly at the time it goes public.

Nu Pagamentos, as Nubank was formally known, ended 2020 with a loss of 230 million reais and a loan book of roughly 18 billion reais. In the first quarter it managed to turn a profit, with net income of 6.8 million reais ($1.30 million), according to Brazil’s central bank.

Last year, mammoth Itau posted 18.5 billion reais in profit, or a return on equity of 14.5%, despite the pandemic. Its loan book totaled 870 billion reais.

In a sign of growth potential, Nubank has already issued more debit cards than Itau, luring many clients who had avoided traditional bank accounts. Nubank has also embarked on a wider regional expansion encompassing Mexico and Colombia.

According to a ranking by CBInsights, Nubank is the seventh most valuable unicorn worldwide, behind fintechs Stripe, Klarna and Revolut.

Reporting by Anirban Sen in Bangalore and Carolina Mandl in Sao Paulo; Editing by Christian Plumb and David Gregorio
Source: https://www.reuters.com/business/finance/buffett-backed-nubank-seek-ipo-valuation-over-554-bln-sources-2021-08-25/
SIGN UP