Late Stage Mature Pre IPO Unicorns - PreIPOSwap.com
From Zero Hedge 6/8/2019:
John Arrillaga and Richard Peery have made a name for themselves as the “Bill Hewlett and Dave Packard of Silicon Valley real estate,” according to Bloomberg. Despite the fact that they are little known outside of the Bay Area, the duo has been helping build Silicon Valley, as the region’s premier developers, for decades.
For instance, Google just dropped almost $139 million on “Building 900”, a property near Mountain View that was dealt by Arrillaga and Peery.

Arrillaga and Peery have now become billionaires, about a half century after they began buying cherry and apricot orchards in what used to be Santa Clara farm country. Today, they’re some of the only people in the area who have gotten rich, but not from tech.
They’re worth a combined $6 billion now and two of their contemporaries, John A. Sobrato and Carl Berg, have also reportedly become billionaires.
While tech has been making others rich, it has also put real estate in demand, sending corporate office prices through the roof and bolstering the partners’ riches.
Drew Arvay, a managing director at Cushman & Wakefield in San Jose said: “They are just as innovative and creative as Steve Jobs and other giants of the technology world. They continue to lead the market with some of the most influential tenants and developments.”

The men are in their 80’s now, and started by developing tilt-up buildings that could be constructed quickly and now form the backdrop to much of Silicon Valley. As they got richer, they embarked on bigger projects, developing corporate campuses like Apple’s One Infinite Loop, built by the Sobrato Organization in the early 1990s.
Sobrato said: 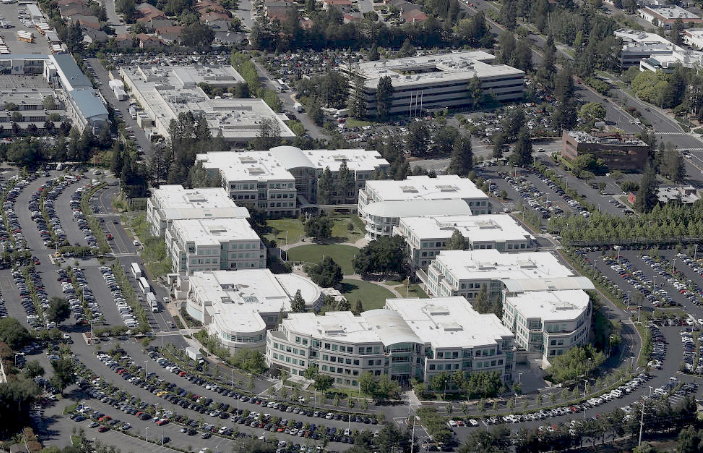 And now Silicon Valley is one of the hottest real estate markets in the country. It’s home to Apple, Google parent Alphabet Inc. and Facebook Inc – and many other names that are hungry for real estate.

“The only thing that can keep these companies from growing is not having places to put employees,” Arvay said.

Office rents in Silicon Valley are up 35% over the past decade, while vacancy rates have plunged from 18% to less than 10%. The value of office buildings has tripled since 2010.
At the same time, residential real estate has also surged, a significant tailwind for landlords like Sobrato who own multifamily buildings. The price hikes, however, have also contributed to “growing inequality, homelessness and tension within local communities.” Rents were up 40% in the five years leading up to 2017 and the median monthly cost for Santa Clara County came in at $3,800 in May. 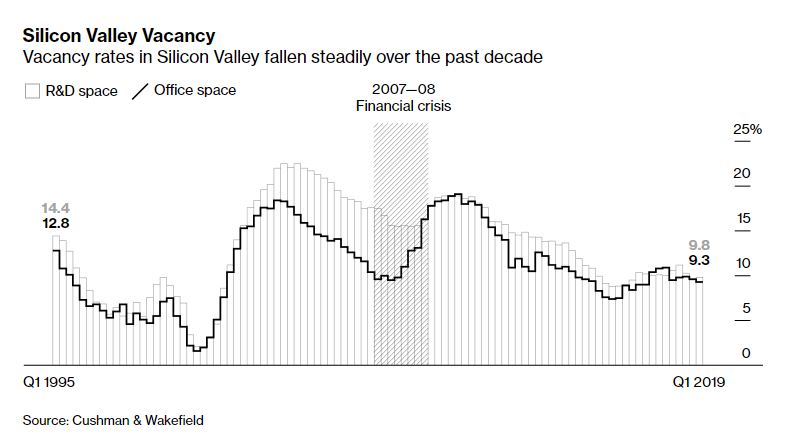 But now, the idea of a downturn looms. After a decade of price hikes, Uber’s IPO has telegraphed tepid interest in further expansion and capital investment in Silicon Valley. Additionally, some companies are taking on the task of developing their campuses themselves, while at the same time fresh builders like Related Cos. have entered the market.
Peery, Arrillaga, Sobrato and Berg are notable due to their longevity.
Julie Leiker, market director for Silicon Valley at Cushman & Wakefield said: “Throughout numerous cycles—including the oil embargo in the ’70s, the S&L crisis of the late ’80s and early ’90s, then the dot-com bust in 2001 and the Great Recession in the late aughts—the Valley’s real estate market has mirrored the region’s resiliency.”
The developers have also been able to time the market successfully:

Arrillaga and Peery sold a 5.3 million-square-foot portfolio, reportedly about half their holdings at the time, for more than $1 billion in 2006, ahead of the financial crisis. Their double act is still going strong. In addition to the Mountain View deal with Google—which also involved two other properties—they are building an office complex in San Jose where the search company has agreed to lease 729,000 square feet.
Both Sobrato and his son John Michael Sobrato, who led Sobrato Organization from 1997 to 2013, have stepped away from day-to-day operations. But the family still owns the entire company, which is increasingly investing in residential units. It now has more than 6,500 apartments on the West Coast, in addition to 7.5 million square feet of Silicon Valley office space, according to its website. The family’s wealth has almost doubled in the past five years to about $8 billion, according to the Bloomberg index.

Sobrato has focused on philanthropy. He, along with his wife and son, became the first two-generation family to sign Warren Buffett’s Giving Pledge. On top of that, the family has given $550 million to charitable causes since 1996.
Sobrato said: “Our current efforts are focused on how our projects can be both profitable and address some of the critical issues facing our region. Our large-scale developments are nearly all mixed-use with both residential and office space. Combining the two reduces traffic, increases sustainability and helps offset the housing affordability issues created by job growth.”
Phil Mahoney, executive vice chairman of brokerage Newmark Knight Frank said: “While Silicon Valley brokers are bracing for a downturn, the next one could be milder than in the past since technology is now embedded in the global economy. They’re doing fine. They’re all billionaires.”
SIGN UP