Pinterest Inc. has sped up the timing of its initial public offering as the image-search company looks to tap into a red-hot market for new issues, according to people familiar with the matter.

The startup, which submitted its IPO paperwork confidentially with the Securities and Exchange Commission earlier this year, is preparing to make the filing public as early as Friday and list its shares on the New York Stock Exchange in mid-April, the people said. The timing of the filing and subsequent listing are fluid and could slip, one of the people cautioned.

Pinterest, last valued privately at about $12 billion, is racing to debut as the IPO market gains momentum, the people said. On Thursday, shares of Levi Strauss & Co. roared ahead in their debut after the jeans maker priced the stock above its targeted range. The shares closed at $22.41, up 31.8%, for the third-biggest first-day jump for a big, non-technology IPO since 2015, according to Dealogic.

Meanwhile, Lyft Inc. is marketing its shares to potential investors and plans to list them next week. The ride-hailing company is seeking a valuation of between $21 billion and $23 billion.

The IPO has frenzy has kicked up a heated battle between the NYSE and Nasdaq , which see big IPOs as franchise-defining opportunities that can help land subsequent business and become a key marketing tool. They also represent new sources of trading revenue. Nasdaq landed Lyft, while Uber has chosen the NYSE, a person familiar with the matter said.

Pinterest Chief Executive Ben Silbermann has been meeting with potential investors in New York and London in recent weeks ahead of a formal roadshow expected to take place next month. 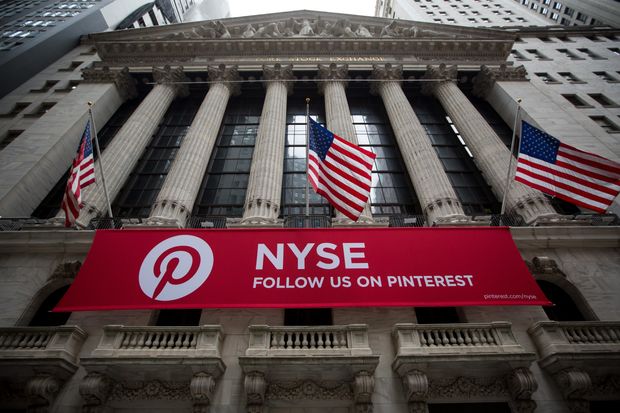 Pinterest s preparing to list its shares on the New York Stock Exchange in mid-April, according to people familiar with the matter. PHOTO:MICHAEL NAGLE/BLOOMBERG NEWS

The backdrop for public offerings could hardly be better right now, with major stock indexes trading near record highs after a late-2018 market swoon. The tech-heavy Nasdaq Composite is up about 18% so far this year. Many highly valued startups had been reluctant to tap the public markets, but that has changed as investors bid up the shares of one newly public company after another.

Executives of companies in the IPO pipeline and their underwriters are mindful that the good times will end sooner or later and are eager to have their shares start trading before that happens.

By moving forward with an IPO in mid-April, Pinterest will likely beat Uber, which is expected to stage one of the largest IPOs on record as soon as late April.

Like most founder-led technology companies, Pinterest will debut with a dual-class structure that gives some existing investors extra votes per share, people familiar with the company said. Some stock indexes have banned newly public companies with dual-class structures, which governance advocates frown upon.

In a move that appears to be aimed at shoring up its governance, Pinterest insiders, including Mr. Silbermann, will only be able to retain their supervoting shares after a certain period of time if they continue to hold a certain amount of stock and, in the case of executives, remain with the company, some of the people said.

In September, Pinterest, which launched in 2010, surpassed 250 million monthly active users, who visit the site to browse through billions of images on topics ranging from living-room furniture to dinner recipes and tattoos.

The company generates revenue from ads scattered across its site and notched more than $700 million in 2018, up 50% from the prior year.

In meetings with investors, Mr. Silbermann has pitched Pinterest as an alternative to online-ad giants Facebook Inc. and Alphabet Inc.’s Google.

—Eliot Brown contributed to this article.